Here’s a piece that may seem less exciting than you’d expect in epic fantasy. It’s about hunting around in a library. Lord Seama is convinced that there is a copy, probably even the original volume, of Haslem’s Song of Ages. King Sirl has enlisted the help of the academics of the Royal College.
I start off with a brief (to my mind) description of the Odolfin Library. Given that some people think that the fashion of writing today spares no room for paragraphs longer than 10 lines, it is possible that I will change the structure of this piece before passing it as worthy to use in The Twist Inside. The idea is that it will feature in the chapter: Mysteries and Assumptions. 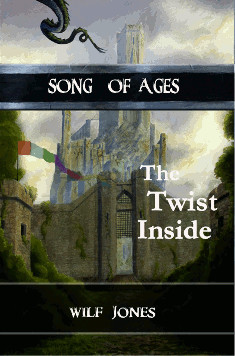 The door at the end of the King’s private gallery, current home to the monster of Mandial, led directly into the Odolfin Library at the first-floor level. On the right a wide staircase led down to the ground floor or up to a second. The main floor below was arranged as three consecutive rooms of magnificent style. They had high ceilings decorated with scenes from Gotherian history; the arches between the rooms boasted gilt plasterwork; the wall to wall bookshelves of dark oak climbed to the heights, with the narrow walkways above accessed by spiral staircases in every corner, each made of elaborately worked wrought iron. In the middle chamber large desks, made of the same dark oak as the shelves, were arranged about a circular bank of cabinets housing the library index, all set on a deep carpet of green and gold. In the end rooms, capacious credenzas made an aisle of the central walkway, their glass tops revealing a treasury of ancient classic editions, with beautifully illuminated texts, and calligraphies of exquisite skill. As a showcase the rooms themselves were all very impressive, if a little too ornate for many a taste. Seama, an academic at heart, much preferred the workaday furnishings of the Escartine Library on Errensea. He didn’t even think of descending the stairs to take in the glory of those rooms, but instead made for a prosaic looking door a little way along the corridor.

That way was the working part of the library, packed with all the volumes and journals most used by the scholars of the Royal College.

‘Upstairs then. Have you found a map, or is it something in the almanacs?’

Sirl smiled, clearly enjoying himself. He shook his head. “We’re going down.’

‘Really? You’re not telling me the Song’s been on display with the posh books all this time?’

‘Further down. We’re heading for the cellars.’

‘Didn’t know there were any. What do they keep down there?’

‘Records of all sorts, financial administration, lots of bits of paper and, more importantly in this case, the tally sticks.’

‘Intrigued is good. Better than annoyed.’

‘Seama, let me introduce you to Osberic Fallon.’

The young man was sitting at a besieged desk in amongst the ancient cupboards and dusty shelves and the stacks of numbered boxes. It was one of the few points of light in this gloomy windowless room.

Osberic jumped to his feet, almost upending his chair in the process. ‘An honour to meet you, my Lord.’

Osberic’s desk was piled high with opened ledgers and scribbled notebooks. Seama didn’t know how anyone could possibly concentrate in such crowded circumstances. He surmised it was the student’s enthusiasm that kept him going.

‘Yes, yes I have,’ he said. ’I’m working on records of accounts – for Professor Dory’s project.’

‘Oh, very much so. It’s not so much the numbers, you see, but the stories behind them.’

‘Quite,’ said Sirl, ‘Professor Dory’s History of the Palace library makes for riveting reading. I believe you’re helping him with a third book in the series?’

‘That’s right, Sire. Though actually, given the scope and quantity of information we’re working with, the Professor thinks he might make two separate volumes.’

‘Good gracious. I’ll look forward to reading it. But meanwhile, I’m told you have found something for us? Something to do with The Song of Ages.’

‘I have, Sire. It’s very exciting. Everyone’s been on the lookout for any mention. I never believed I’d be the one to find it.’

Seama almost jumped in surprise. ‘You’ve found it? You’ve found the Astoril copy of The Song of Ages?’

The consternation in Osberic’s face was as obvious. ‘I – er – I  must beg your pardon, Lord Seama. I have found the mention, not the book.’

Seama took a deep breath. ‘No Osberic, I beg yours. I was too keen to jump to conclusions.’ He turned to Sirl. ‘I didn’t know you had everyone looking.’

‘Well, who better than academics and students to find something in a library? I addressed the College Quorum to ask for their help. Osberic, would you like to show Lord Seama what you found?’

Osberic nodded vigorously and eagerly. ‘At once, Sire. It’s over here.’ The young man lifted one of the lanterns perched on the cupboard next to his desk and led them to a small table not far away.

There was no crowding here. There were only two items for inspection. One was a ledger, much like those that cluttered the student’s desk. The other was what Seama could only think of as a stick. It was flat, a foot long and three inches wide.

Osberic looked to the King. ‘May I?’

‘Yes of course. You’ll probably explain it all better than I can.’

‘This is a tally stick. It’s been a way of keeping financial records between sellers and buyers for thousands of years, though not on Asteranor for a good long while now. Seven hundred years, I think.’

‘Well, originally we think that people would take a straight stick, or perhaps an animal bone, make notches in it to record information and then split the stick or bone in two, so that either side carried the identical notches. But things were a little more sophisticated when this one was made. Tally makers produced thousands of these, all exactly to the same template. Everyone used them. People handling accounts, regular people paying their taxes, shopkeepers taking records of their incomings and outgoings, employers paying wages. They were made of hazel wood – easy to split, but hard enough to keep the irregularities in the surface sound for many years.’

Seama was struggling to understand the point. “What have the irregularities got to do with it?’

‘They’re caused when the wood is split. It’s because of the irregularities that each pair of sticks would fit exactly together and not with any other tally stick. Easy to prove that each side was part of the one transaction. What that meant was that you couldn’t cheat by adding more notches later because the notches on the other paired stick wouldn’t then tally.’

Seama stooped to examine the stick on the table. ‘So, there are notches I can see here on both long sides of the stick. All the notches are of different widths. This line at the top has one quite wide notch with perfect right angled corners—’

‘I see. And then one less wide. Shall we say two fingers? And then five the same at, what, quarter of an inch? All very neatly cut. What does it all mean?’

‘The three-finger width indicates one hundred shillings, the two-finger width is a fifty, and the quarter inch, a barleycorn-width, each one shilling. Straight cuts with no wood removed would have been be for pennies but there are none. So, in this case the sum given over was one hundred and fifty-five shillings.’

‘And the row at the bottom?’

‘That would be the date – you’ll notice two deep v-shaped notches at the start, two thousands, no shallow v-shaped notches – they would have been hundreds – but then  four single finger width squared cuts indicating tens. And then barleycorn widths, seven of them, followed by five straight slices.  It’s the v-shapes that tell you it’s a date. This stick was cut in May, 2047.’

‘Fine. So, someone, we don’t know who, paid one-hundred and fifty-five shillings for something back in 2047. How does that help us? I guess that this ledger tells us more, but how do you know that this particular one is relevant?’

Osberic frowned as though he thought it baffling that anyone could be so ignorant. Seama thought that quite funny.

‘Well, to start with, you’re seeing this the wrong way around. I found the ledger first and the tally stick after. Both sets of records are organized by the year: the tally sticks on shelving in the cellar next door, the ledgers in boxes at the back of this room. And the next thing is, it was common for the person handing over the money to sign the stock - that’s the tally kept by the seller - and the receiver to sign the foil – the other bit – with both indicating the day of the month they signed. And in this particular accounts system, the receiver would mark up the stock with an index number.’

‘Do you mean signed in ink? I don’t see any writing.’

Behind him Seama heard King Sirl make a noise that sounded like a snigger. ‘Well you wouldn’t on the split side, Seama,’ he said. ‘It’s too ridged to write on. Turn it over.’

Seama picked it up, stroked a finger over the rough face for confirmation, and then turned it over.

‘I really don’t like the way this is going,’ he said.

The scrawled signature on the reverse side of the tally was instantly recognisable. It was the same signature that was inked into the frontispiece of The Song of Ages. The name Haslem with a G appended to it.

‘Haslem Garassin,’ said Osberic. ‘And the numbers below – 5.17 – making it the 17th of May; and the numbers further along – 5-173 – put the corresponding entry in the 2047 May register of accounts, entry 173. The ledger you have here is that register. Entry 173 starts half-way down recto and continues over the page. You can see at the top of the entry it states: Purchased by Coll.Magi - Errensea, various hystories for the sum of 155s. And then there’s a list of the books involved. You need to look at the third title on the next page.’

Seama blew out a long breath. ‘Do I have to?’ He turned the page. ‘Damn and bloody blast it!’

‘Hasn’t been here for more than a thousand years, Seama,’ said Sirl. ‘You made an assumption when you read the Preface. You thought you were reading one of the copies Haslem had mentioned. But that doesn’t make sense – I can’t think why it didn’t occur to me before. The preface was a letter to the recipient, King Banya. Surely with the copies, whoever the other recipients were, they too would have had an inscription personally addressed. Seama, the book you took from the flames in the Escartine Library was the original copy of The Song of Ages, placed there by Haslem himself.’ 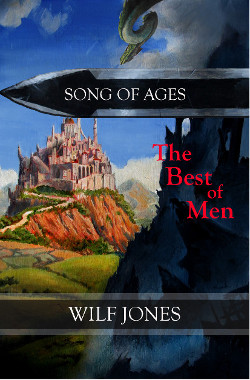 The Best of Men
Now available as a downright gorgeous 730 page Paperback Original.

Order at any bookshop worldwide
or via online retailers.

Promotional Offer UK:
£12 plus p&p
Go to the publisher’s website
here
(NB this link will take you to
WriteNow! Publications

THE BEST OF MEN

An epic fantasy of monsters, gods, warriors and wizards, of heedless villains and decent everyday people.

available as a
kindle edtion

If you enjoy the The Best of Men please visit the relevant  link to leave a star rating and a brief review.

It is only by recommendation that books can become successful and positive comments are very much appreciated.