The process of writing any novel can be tortuous. You can find yourself being led off down many a wiggly chaotic path. What keeps you on track is consistency – your characters should be immutable, they should have voices that are the same in the last chapter as they are in the first, your place names should stay the same throughout, your plot should not develop huge craters that can’t be filled and must never randomly change direction. Lots of plates to keep spinning, or they all come crashing down. And if you’re writing epic fantasy, as much as anything, it is essential that the wider story arc must be maintained.

And so, when it comes to editing any particular section of your text, you need to keep a keen lookout for incompatible  elements. Contradictions that must be eradicated. Straightforward, isn’t it? And yet, there are times when it really isn’t. The creative process is necessarily loose.  Sometimes when you are in full flow, either bashing at the keyboard, or like me, scribbling away in your note books, it is inevitable that inconsistencies will periodically appear. Normally you’ll spot them during your first edit, you’ll be amazed at how dopy you can be, and then you’ll exterminate them.  But hold on. Stop! Why don’t you read the piece again, ask yourself if you’re being too hasty? What if the inconsistent elements might actually help you to develop your story, and even make it better?

Occasionally I find myself following the plan so closely that I’m bored with it. Not a good thing. If I’m bored, what will the reader be like? Will I have readers? You may ask what I do on these occasions. What I do is lob a hand grenade into it. The clearest example from The Best of Men was when I decided to interrupt  Seama Beltome’s journey into the west and his confrontation with the Black Company.  I could see where he needed to go and what he needed to do, passage by passage. It was all too straightforward. And it was boring. I needed something new.  Completely without any sort of plan in mind, I  shipwrecked the good wizard on an island called Tumboll. An island that had not existed until I needed it. The interesting thing is that this one random decision absolutely changed the game. It produced so much reverse engineering of the plot that the entire project took on a new meaning. A better meaning. The Best of Men became a better book, The Song of Ages  a better trilogy. It is certainly true that in writing a novel you have to maintain consistency, but you mustn’t stifle invention.

I’m gabbling on about this because as I finished off editing Inventions (Part 2 of The Twist Inside) I found a problem. The reported movements of a key character were entirely inconsistent with his own history, and with the whole plot. How could I have let that happen? Why didn’t I see it? A rewrite was required, the offending inconsistency deleted. But wouldn’t that leave me with a hole to fill? What to do? I’m not going to tell you what it was - far too embarrassing - but  in my attempt to fill the very evident hole I realized the inconsistency was actually a good thing. It was  revelation, it was progress. I launched into a whirl of invention. Ideas span out out all over the place. Good ideas, bad ideas, ideas so stupid they shouldn’t be called ideas. Quickly, all this invention got carried away with itself and threw up all sorts of complications. Consistency was not helping. I had to make changes.

The Song of Ages is a novel, set in a particular time (mostly 3052PF) in a particular place (mostly the continent of Asteranor, on a planet now named Earnor) and with a range of characters particular to that place and time. But if there is an Asteranor in 3052PF, then there must have been, obviously, at least three thousand odd years of Asteranorean history predating this time.

With the Song of Ages, the historical background is actually important to the present story. And as the author, if I find that something I’ve written in the novel actually contradicts my version of the history already created, and I want to keep the new piece, then I have to go in and change the history. That’s what had happened here. A significant contradiction had arisen that needed some reverse engineering. But the changes I made altered the history and the motives of a key historical figure. Now I had to think of him in a new light. I’ve yet to discover how much this new light will affect the outcome of the whole project.

Some publishers or agents have determined that fantasies based on bloated histories are unwelcome. One agent’s website warns that they will not  consider taking on any writer “doing a Tolkien”. Which I take to mean the creation of lots of miscellaneous background that nobody wants to read, and won’t make them any money. Fair enough, they have a living to make. They want their authors churning out new novels not  fretting about the historical record of  imaginary epochs. I’m definitely not their type of client.

For the Song of Ages I create history on an ongoing basis, story by story. The fiction I created to give the history a structure is possibly a little elaborate. Anil Docha is a doctoral student at the College of the Magi, twenty years after the action described in the Song of Ages. He’s an importunate young man, persistent and pushy. He decides to impress his professors by writing an Episodic Chronicle of Asteranor – all 8000 years of it. It is episodic because his knowledge, as you may guess, is incomplete and his renditions of events are a little slapdash. If you were to read the only copy we have of the Episodic Chronicle you’d be surprised to find that some sections are well written and detailed, yet others much less so and sketchy. Anil Docha was not beyond plagiarising large passages from other more learned volumes.

For consistency’s sake - that is, in order to create a new consistency - I have altered several sections of Anil’s Chronicle including an entry titled:  “Haslem on Tumboll and the Spell of the Song.” I have been told that the entry is oddly entertaining even though Anil Docha’s style is quite annoying. But he’s meant to be annoying. He has a wilful habit of going off on what the reader can only assume to be a tangent. But all of that’s ok. From my point of view, The Chronicle is not necessarily written with the needs of readers in mind. The Chronicle is a tool I use to keep track of what is quite a complicated story. It forms the background for the plot. Because of it, If you read The Song of Ages you can be assured that the author knows everything about this creation, and he will never leave you floundering or grasping at loose ends.

However, while The Chronicle has pretty much been written to amuse and inform one person - me - it may well be that you could find it amusing too.

“Haslem on Tumboll and the Spell of the Song” is the first entry on the chapter of The Chronicle entitled Progress.
If you’re vaguely interested, or totally intrigued, or simply bored with lockdown, and you’re nearly as bonkers as I am,  you can find it here:

And there’s another 35000 words of it you can dip into any time.
This is the start page:

Towards an Episodic Chronicle of Asteranor

In conclusion, I can report that my Song of Ages hangs together, the plot remains true, not because of slavish adherence to the original plan, but because it is consistently inventive.

It is “doing a Tolkien” that keeps me going.

I used to blog regularly but lost the impetus after a little heart trouble - the physical kind - in 2015.
This new page is me getting back to normal. (It’s in the eyes!)
Let’s hope I find something interesting to blog about. 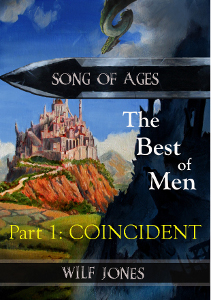