Or order direct from the publisher at
Sorcerer’s Ship Press 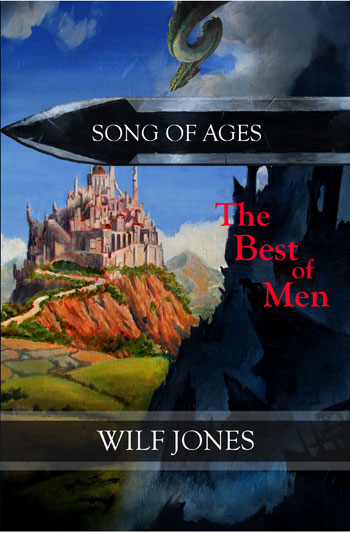 The Best of Men

Something is coming.
Seama Beltomé can feel it. He can see it.
The four nations of Asteranor are already at war or soon will be. But what’s coming is worse than that.
Seama is reading Haslem’s Song of Ages. Or whatever’s left of it. An obscure history of mankind, it announced its presence by bursting into flames in the Escartine Library. The few pages rescued reveal a tantalising glimpse of the Earth’s deep past, a revelation of Ages and deeds unknown.
And they carry a dark warning:
what is forgotten cannot cease to have been,
a crime against existence cannot be undone,
and the banished will seek to return.
Seama has been summoned because the time has come.
Something more dangerous than death, an ancient evil, stands just beyond the gates of the world.
It waits only on a passage opened, a door unlocked.
Seama can hear the rattle of the keys.

Epic Fantasy on a grand scale. Very intricate political scheming and a very fearsome and powerful enemy is being created. One wonders how the forces of good will prevail. Wilf is talented writer.
British Fantasy Society Review
(http://www.britishfantasysociety.org/reviews/coincident-by-wilf-jones-ebook-review/)
Rex Sumner

Intricate in plot, brisk in action, and rich in characters, the work is on a dazzling scale.
If you like your fantasy worlds expansive and complete, a story thatâ™s as challenging as it is entertaining, and if you like the writing imaginative and well-crafted, The Best of Men is as good a book as you’ll find.
Amazon kindle review from Budley

the best fantasy novel i’ve read for a long time
characters are very believable, the plot and back story clever and gripping
i’m looking forward with great anticipation to the next one
Amazon kindle review - David Jones

This fresh, fighting construction never ceases to surprise. The plot twists and erupts; ships are downed by mythical monsters, wizards wield spells of great power and puzzles, clues and strange happenings abound. The characters are brilliantly drawnâ¦ There is diversity, humour, friendship and insight, everything you would expect in the creation of a new world. It really is a feast for the imagination.
Amazon Kindle review - George Wicker

A super book, which held me from the first pages, and carried me right through to the end.
Please do a sequel!
Amazon kindle review - Dr Mark Baker

The Best of Men is a multi facetted book with a host of stories within stories. What I enjoyed about the book is its sense of reality. As I read, I got a feeling of actually being able to place myself in the world invented by the author which is the reason I found this book so good. I’m tempted to make comparisons with other fantasy writers but that would be a mistake. The Best of Men is different; the characters are well drawn, entertaining and sometimes quirky. Characters, speaking broad Yorkshire and eating bangers and mash, macho drinking competitions and much of life’s trivia all adding colour to an epic adventure.
Amazon Kindle review - Patrick Bolingbroke